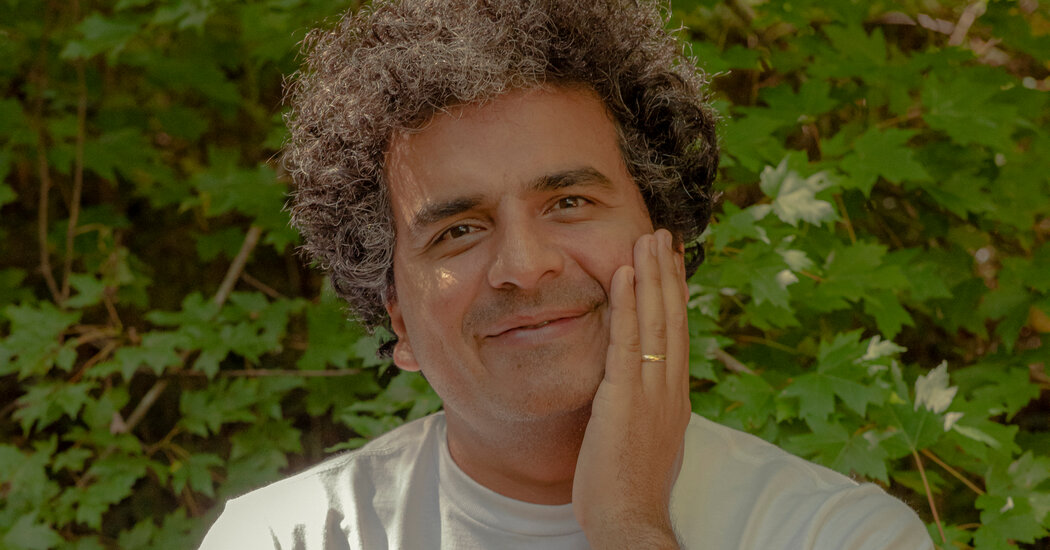 The end is weighing heavy on Helado Negro. Some of his unease stems from traditional concerns, like aging (the musician, born Roberto Carlos Lange, turned 41 this year). But some is a consequence of looming global catastrophes: the existential dread of climate change, the seemingly unending nature of the pandemic. “I know the world has always been in some kind of constant conflict and flux,” he said. “But it feels even heavier now.”

Since 2009, Lange has crafted ambling, dreamlike music. Over six studio albums and five EPs, he has collaged lunar synths, tape loops and field recordings into gentle experimental compositions that meditate on immigrant identity, healing and tranquillity. In 2019, he received grants from United States Artists and the Foundation for Contemporary Arts, highlighting his immersive, multidisciplinary approach to performance, sound and visual art. “Far In,” his first album for the stalwart indie label 4AD, will bring his subtle hymns to what may be his largest audience yet on Friday.

Chatting over a video call from Asheville, N.C. — where Lange and his wife, the artist Kristi Sword, moved this past summer after over a decade in Brooklyn — he offered a tour of his new home, the outside of which is painted sky blue. “I’ve been living in small apartments for 15 years,” Lange explained, as studio equipment rolled by: vintage synthesizers, an antique piano — the foundations of Helado Negro’s soothing, celestial lullabies.

Lange’s first full-length album as Helado Negro, “Awe Owe,” blended some of the sounds of his South Florida upbringing into warm bilingual jams, weaving whimsical freak folk into mellow beats and melting marimbas. Since then, Lange, who is the son of Ecuadorean immigrants, has gone more electronic: The albums “Invisible Life” (2013) and “Double Youth” (2014) stitched robotic synths and tender melodies into looping, wandering flurries, not unlike Lange in conversation — he often interrupts one idea for another. On Twitter, he described the songs on “Far In” as “mind meanderings drawn in sound.”

Lange has spent his whole life daydreaming through film and music. When he was in middle school in the early ’90s, his older brother returned from a high school trip to Europe with a collection of techno, acid jazz and jungle compilations that jump started his obsession with electronic music. Once he got to high school, he would visit a record store in South Beach to buy Aphex Twin and Tortoise CDs for relatives in Georgia.

That early exposure to electronic music “really flipped my brain,” Lange said. It led him to underground basement parties hosted by a pirate radio station in Miami, where he was hypnotized by ragga D.J.s and M.C.s. He started making beats and playing the guitar, recording himself on his brother’s computer, which had an early edition of Pro Tools.

Lange eventually ended up in Georgia to study computer art and animation at the Savannah College of Art and Design, where he took a class with a professor who introduced him to sound installation. “It just tweaked my brain even more,” he explained. “I was just like, ‘What is this? I want to make stuff like this.’”

Lange’s profile rose in 2015 and 2016 with the release of the tracks “Young, Latin and Proud” and “It’s My Brown Skin,” smooth anthems of affirmation for many Latino listeners contending with xenophobia and racism during Donald J. Trump’s presidential campaign and early days in office. On tour, after long and demanding performances, fans approached him and shared their own experiences. “It meant a lot to me,” Lange said. “A lot of it was really beautiful, but really hard.”

On “Far In,” these themes are a little less literal. “I’m going to hold back from sharing a lot of my own traumas,” he said. “There’s an aspect of sharing experiences and, depending on how intense they are, some of them can make people complicit in your misery.”

Lange was partially inspired by the 1991 science-fiction epic “Until the End of the World,” which almost became the title of the project. “I have a good relationship with movies that don’t hold your hand so much,” he said. “That’s why I like that Wim Wenders movie. It starts somewhere and it ends somewhere else.”

Ed Horrox, the 4AD executive who signed Helado Negro to the label, said that Lange has a powerful ability to forge connections: “Whether it’s in person, whether it’s on a Zoom call, whether it’s a bloody three-line text,” he said in a video chat, “he’s got a knack for sharing warmth and positivity.” Horrox first found Lange’s work while searching for music to play on his London-based radio show, “Happy Death,” and followed him through the years. The response to Lange’s arrival on 4AD from listeners proclaiming him “my favorite artist” was “quite overwhelming,” Horrox said.

The “Far In” standout “Outside the Outside” is a soft-focus disco groove with laser synths and thumping bass that’s an ode to the small pleasures of diasporic life: Its video is a montage of camcorder footage of house parties his family threw in the 1980s, when they would stay up dancing to salsa or merengue. “I used to wake up and it would be 7 in the morning and people would still be downstairs drinking,” Lange said with a laugh.

“La Naranja,” a prayer for the apocalypse, arrives near the end of the album. “Y sé que sólo tú y yo/Podemos salvar el mundo,” Lange sings with a sunny glow. “And I know that only you and I/Can save the world.” “La Naranja” oozes radical hope, but many of the songs on “Far In” are also about confronting the end with a sense of presence, even with the knowledge that doom is near, like “Aguas Frías” and “Wind Conversations,” both inspired by the ecological drama of the Texas landscape. (Lange and Sword were in Marfa during the first months of the pandemic working on “Kite Symphony,” a multimedia project documenting the wind, sound and light of West Texas.)

L’Rain, a Brooklyn-based experimentalist who played bass on three of the album’s songs, said softness surrounds Lange, both as a collaborator and vocalist. “It’s an intimacy that’s really immediate and really visceral,” she said in a phone interview. “When working with Roberto, on every level — from the way that he emails and the way he schedules rehearsals and talks to us about the music and asks us our opinions — you just feel respected and cared for,” she said.

The intentions Lange set for the project have offered inner peace, too. “I feel the most comfortable I’ve ever felt expressing through music,” he said. “Sound and music has always been that for me: It’s always been that great place to enter into. That’s the best way that I’ve found myself to be a part of that idea — of being present within.”