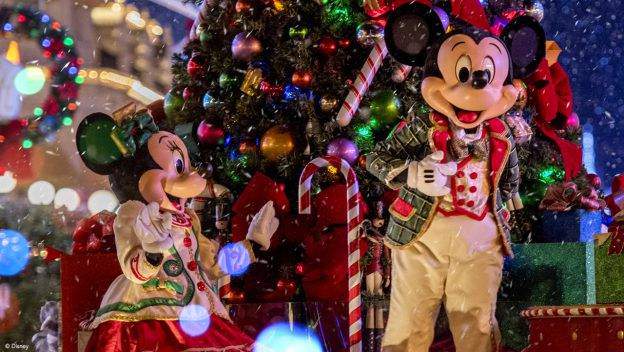 LAKE BUENA VISTA, Fla. – As Walt Disney World continues to celebrate the World’s Most Magical Celebration for its 50th anniversary, things are about to get even more festive for the holiday season.

On Thursday, Disney released its plans, saying guests can expect to see enchanting entertainment and cheerful holiday décor across the resort.

See some of the details below at each of the theme parks and Disney Springs.

At Magic Kingdom, the park will be decked out for the holiday season once again.

The four-hour event begins Nov. 8, and will take place on 24 select nights through Dec. 21. Tickets start at $169. Guests who purchase tickets can expect:

On evenings when the Magic Kingdom is not hosting the special event, Cinderella Castle will be given a special holiday projection before turning into a beautiful Beacon of Magic.

The world’s greatest holiday festivities are returning to the EPCOT International Festival of the Holidays presented by AdventHealth.

Beginning on Nov. 26 through Dec. 30, guests can celebrate with seasonal entertainment and food and drinks from holiday kitchens around World Showcase.

The EPCOT Candlelight Processional is also returning for guests to enjoy this year.

In addition to the Candlelight Processional, other holiday traditions of the world will come to life around World Showcase, including:

At Disney’s Hollywood Studios, the terrifying Tower of Terror will transform into a festive and fun holiday surprise during the projection show, Sunset Seasons Greetings.

Disney said the famous icon will turn into a Muppets gingerbread house, a “Toy Story” toy hotel, a snowy corner of “Frozen’s” Arendelle and a Dickensian village from “Mickey’s Christmas Carol.”

Guests will catch sight of Santa cruising down Hollywood Boulevard in his red convertible during the Santa Claus Merry Motorcade.

The attraction “For the First Time in Forever: A Frozen Sing-Along Celebration” will add a festive finale, featuring everyone’s favorite snowman, Olaf, and celebratory songs of the season.

When the Hollywood Tower of Terror is not projecting Sunset Seasons Greetings, the tower will become a Beacon of Magic to celebrate the resort’s 50th anniversary.

“Discovery Island will spring to life with a Merry Menagerie of winter animals, realized in the form of life-size, artisan-sculpted puppets. Reindeer, foxes, polar bears, penguins and more interact with guests, accompanied by serenading musicians as they create a whimsical display and playful atmosphere for guests of all ages to enjoy,” Disney described on its blog.

Floating down the Disney river, guests will see Santa, Goofy, Chip ‘n’ Dale and other Disney character friends bringing their own style of festive flair.

When night falls, the Tree of Life will glow as a Beacon of Magic and will feature a number of holiday and wintery animal stories projected.

The Christmas Tree Stroll presented by AdventHealth is returning this year.

Guests are invited to see elaborately decorated Disney Christmas trees that will be located in the neighborhoods throughout Disney Springs.

Disney said holiday decorations will adorn the shops, and when the sun goes down Central Florida will see snow showers in Town Center.