Visual Art as a Land Acknowledgement

The Port of Seattle exists on Indigenous land. We acknowledge the ancestral homelands of those who walked here before us and those who still walk here, keeping in mind the integrity of this territory where Native peoples identify as the Duwamish, Suquamish, Snoqualmie, and Puyallup, as well as the tribes of the Muckleshoot, Tulalip, other Coast Salish peoples, and their descendants. We are grateful to respectfully live and work as guests on these lands with the Coast Salish and Native people who call this home. This land acknowledgment is one small act in the ongoing process of working to be in good relationship with the land and the people of the land.

To celebrate Native American Heritage month, the Port highlights the most recent art installations in the International Arrivals Facility (IAF)! All the artworks described below were created by Native American artists. Before telling you the stories of these newest artworks at Seattle-Tacoma International Airport (SEA), let’s give credit where credit is due.

This initiative started in the Fall of 2020 with a group of 10 Port high school interns who presented the concept of incorporating Indigenous art and culture at SEA:

In July 2021, the Port Commission approved $475,000 to acquire Indigenous Art of the Pacific Northwest region. The Public Art Program had two primary goals:

Rest assured, this is the first of many future opportunities that the Public Art program wants to take to diversify its collection.

In the Fall of 2021, 30 pieces of art were purchased from regional galleries. Fast-forward to Fall 2022, and voila the artworks are for the most part installed in the IAF.

Here’s what you will see in your next visit:

Born in Omak (WA), Joe Feddersen is affiliated with The Confederated Tribes of The Colville Reservation (Okanagan and Lakes).

For Feddersen, his work “investigates sign and cultural identity. This inquiry merges basic elements of basket designs from my ancestral home, the Inland Plateau region of the Columbia Basin, with urban imagery to speak to perceptions of land. My print work builds from a dialogue with traditional basket designs. The prints typically build complexity through layering signs. These signs tenuously dissolve into an overall field while still maintaining direct ties to my native heritage.” 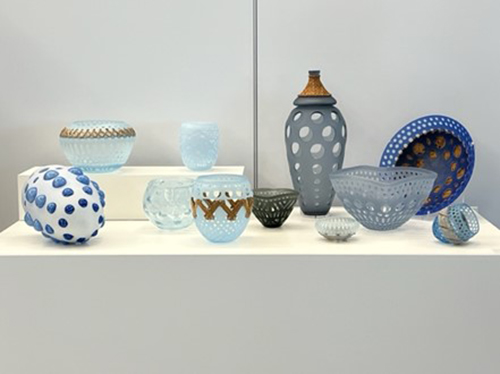 Raya Friday was born in Seattle and is a member of the Lummi nation whose tribal lands are situated on the edge of the Salish Sea near Bellingham (WA). Water Series is located next to baggage claim 24 in a large exhibition case where you will find these 11 delicate and astonishing glass artworks.

“The Water Baskets series is an exploration of the foundational way water has shaped the region, both culturally and environmentally, and how this fundamental element of [Friday’s] identity and survival is now being threatened by climate change. The colors and texture of these blown glass pieces is inspired by the delicate and enduring qualities of beach glass. The cedar and wire elements represent her hope that both traditional and contemporary knowledge can work together to preserve the life forces of this land.” (The Stonington Gallery). 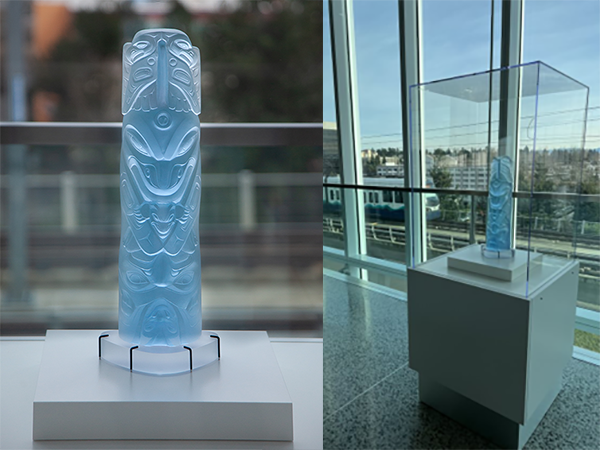 Singletary is a Tlingit of the Eagle moiety — one of two tribal societal groups — and a member of the family house group of Kaagwaantaan.

As you stand on the mezzanine, admiring this brand -new facility, take a few minutes to observe Kéet by Singletary. Kéet is the Tlingit word for Killer Whale and is also the artist’s main crest symbol.

“The original wood sculpture was carved by David Svenson and depicts the Killer Whale with an Eagle on the top representing my family symbols. Emerging from the mouth of the Killer Whale is a Thunderbird, which was the clan that Svenson was adopted into. The bottom form is a double headed wolf, as a kind of soul catcher and morphing into a three-dimensional wolf at the center.”

For years, Singletary has also been captivating audiences with traditional cultural objects in blown glass such as brightly colored glass baskets, like Red Glass Berry Basket with Brown Lip (2021). 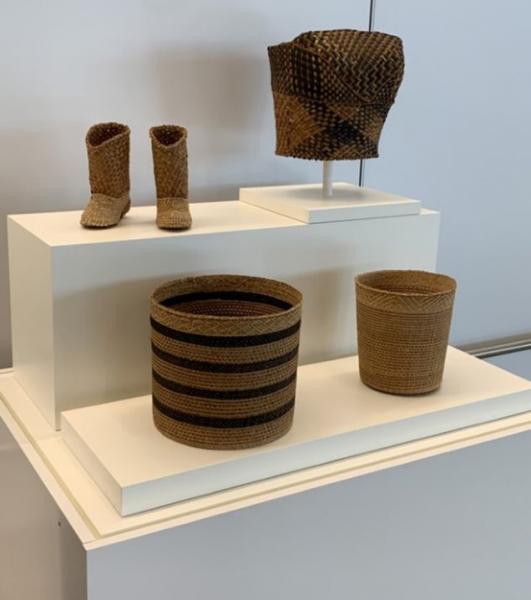 Lisa Telford is a Native Haida using Northwest Coast-style weaving techniques. An exhibit case near baggage claim 23 displays four artworks by Telford; in the lower section you can see two traditional baskets, and in the upper section there are two contemporary garments (a bustier and a pair of cowboy boots).

“Her work serves as a commentary on Native identity, stereotypes, and fashion. As a Git’ans Git’anee Haida weaver, Lisa Telford comes from a long line of weavers, including her grandmother, mother, aunt, and cousins. Her work encompasses baskets, traditional hats, and cedar bark clothing. She believes that Haida Basketry was essential for survival years ago, and thus, the beauty of this life-giving craft should be celebrated through continuing the tradition and honoring nature with each new piece.” (The Stonington Gallery) 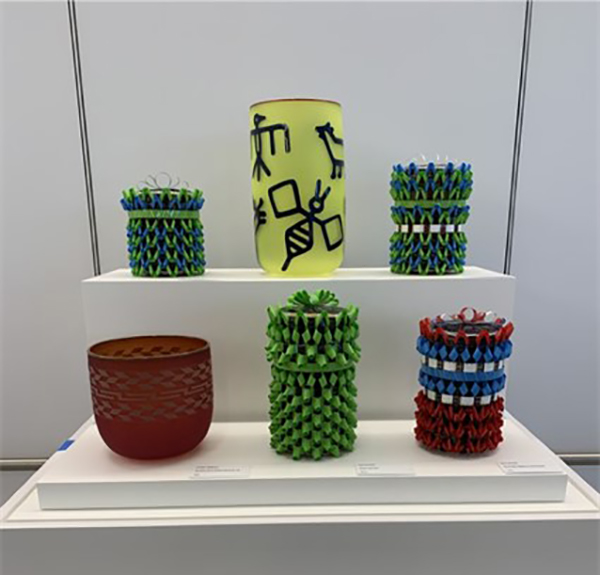 Gail Tremblay is descended from Onondaga and Mi’Kmaq ancestors and resides in Olympia (WA). Tremblay weaves her baskets using 16mm film stock, colored film leader of various sizes, and gold metallic braid, instead of utilizing the traditional material of sweetgrass. The reason behind these non-traditional materials is that the artist wishes to comment on indigenous life in the 21st century and call attention to the devastating impact of global warming.

“I found film was an interesting material to weave, and I enjoyed the notion of recycling film and gaining control over a medium that had historically been used by both Hollywood and documentary filmmakers to stereotype American Indians.” (From Correspondence between the Froelick Gallery and the artist, June 2020).

What happens when the civilization melts the Ice? is a basket woven with 16mm film from a series of work that uses film stock from a 1967 documentary about Inuit culture called “At the Winter Sea Ice Camp.” In her work, Tremblay captures the history of her culture and the impact climate change is having on her people.

She states that “the film is trying to make it seem like Inuit culture doesn’t change, while at the same time, the whole world is changing incredibly, so much so that within the next 50 years, it’s almost impossible to do what your ancestors did.” (Correspondence between the Froelick Gallery and the artist, June 2020). 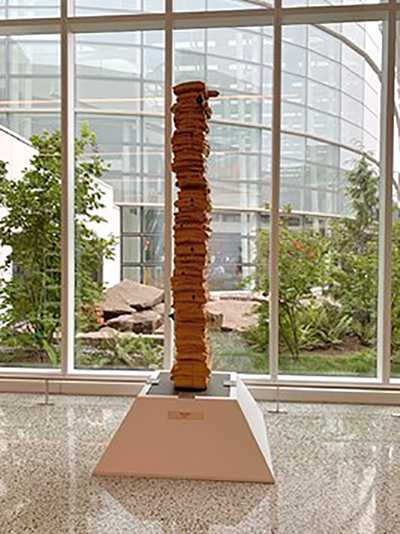 Born in Seattle (WA), Marie Watt now works and lives in Portland (OR) and is a member of the Seneca Nation of Indians. As you are about to leave the IAF it will be difficult for you to miss this eight-foot-tall sculpture by Marie Watt. Textile plays a major role into the artist’s body of work. Watt started collecting wool blankets from thrift stores in order to construct totem- and ladder-like sculptures. On a more personal level, blankets in her tribe and other native communities are given away to honor people witnessing important life events.

Made of Alaskan yellow cedar, “Canopy (Omphalos) is a continuation of the artist’s exploration of wool blankets, their history of being handed down from generation to generation, and the human stories found within these everyday objects as shelter providers and symbols of security.” (from Greg Kucera Gallery)

By the end of 2023, two more pieces of art will be installed at SEA.