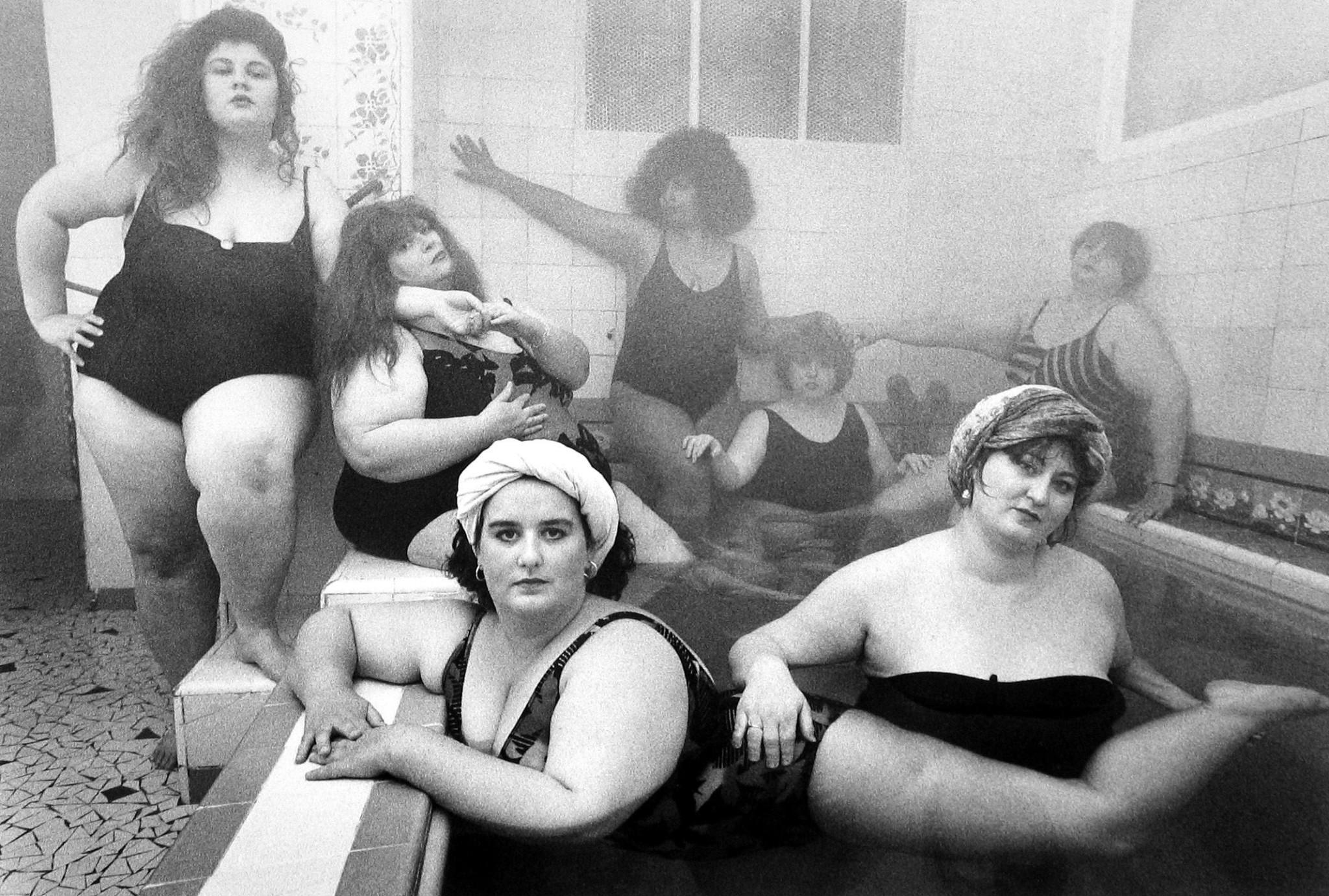 This is the 27th installment of the online series by Peter Fetterman Gallery called the Power of Photography highlighting hope, peace and love in the world. We invite you to enjoy and reflect on these works during this time.

Only a smart, sensitive, intelligent, maverick like William Klein could have pulled this image off.
It indeed has power and beauty. Shot in a Russian steam bath in Paris, it has great humanity and warmth and even tenderness and is about community and strength. Accept us as you find us it emotes. It’s an image one never forgets and I always look forward to returning to see it again.

Jerry first met Bob Dylan in 1965 in New York through their mutual friend Sarah who was later to become Dylan’s muse and wife. Dylan trusted him and they did many sessions together including the cover for Dylan’s double album “Blonde on Blonde”.
But this is my favorite shot Jerry did. He portrays him like Byron, a romantic poetic figure dressed in his classic counter culture style ruminating on his beautiful words.

Louis lived a bifurcated life between New York and Paris, his two “spiritual mothers” as he once described the two cities.
Here is one of his very early Paris images. Aubervilliers was a poor working class area on the outskirts of the city. It was a chilly rainy day when he set up his 4×5 view camera on a tripod in the street. There were few cars around back then in 1947. These two children were curious about why someone would be doing this and probably had never seen a camera like this before and offered to pose for him. I’m sure Louis related to something in their faces and poses as he himself had been born as an identical twin.
There is such joy and tenderness in this image and that magical Paris light completes the perfection.

In my experience of dealing with great photographers one of the key attributes that they all have in common is incredible patience. When visiting Dal Lake Steve spent enormous amounts of time just traveling with the local flower sellers as they journeyed down the river. For two weeks he would ride with the merchants during the morning. On this day the vibrant flowers and the boatman, arm raised in mid-paddle, combine with the morning light to create the perfect composition. It is one of Steve’s most favorite images and mine too.

This is one of the most primal and beautiful images in the history of photography. I have always held it in the highest regard since I first saw it so many years ago. It poses all the big questions in life without explicitly answering them which gives it its haunting mystery. It was shot in the heart of Big Sur county. Its title only adds to its strength. When Wynn entered the room where he was to take the image, he saw out of the corner of his eye a book propped up on a wide window ledge. It must have stimulated some profound thoughts as well as giving him the most perfect title. He was also such a master in the darkroom. The physical print is just staggering in its perfection and mood.
All of us have to navigate life issues in all its myriad challenges everyday, even more so now right?

René’s feelings towards his wife on their simple honeymoon in Paris in 1952 were pretty intense. They were there together at a special moment in their lives. What flowed between them was just natural and intimate. He never posed her. He just observed and recorded their time together. The white shirt, the nape of her neck. No artifice, just pure love and affection. Thank you René for sharing this part of your life with us. You are a constant inspiration at 93 years young.

This is one of the most powerful images from Sebastião’s epic “Genesis” series. It has enormous power stemming from the simple fact that it no longer exists, a simple retort to any proponents of the view that global warming is a myth and not one of mankind’s most crucial issues that we need to confront…

This has surely got to be one of the most tender, beautiful, heartfelt images about marriage ever created. Robert was exactly what Henri says he was. Just a beautiful human being. This generation of photographers can never be replaced or duplicated. They belong to another time in terms of their basic humanity and feelings and their deep understanding of the beautiful moments of everyday life.

When you look at a Herman Leonard photograph you feel you are in the front row there with him, experiencing the exact same moment as he did just before he pressed the shutter. This is one of the greatest jazz photos ever taken of one of the greatest tenor sax players ever, Dexter Gordon.
It captures the essence of jazz and who can ever forget his “performance” as the fictional player in
“Round Midnight” probably the greatest piece of cinema ever to depict the true milieu of Jazz and why its admirers have such passion and devotion to it.
As Dexter himself once said,
“You gotta have heart to be in this business. If you don’t have heart you’re not going to make it.”
I guess that goes for any creative endeavor. The image is on the cover of one of Gordon’s greatest album’s, “Ballads”. Sit back and enjoy.

This is an image that I can never forget in Klein’s body of work. You do not see it very often. For me it has always been the photographic equivalent of Arthur Miller’s “Death of a Salesman”. That play premiered on Feb 10th, 1949 and this image was taken just six years later. Maybe Klein was aware of Miller’s play when this piece of human theater resonated with him but probably not.
It sums up a mood of a post-war era, when consumerism more than ever entered the era’s psyche. Everything about it evokes that time, the clothes the salesmen are wearing and their body language. And that look of just waiting to realize the dream.

The Power of Photography is now a book published by ACC ART Books.