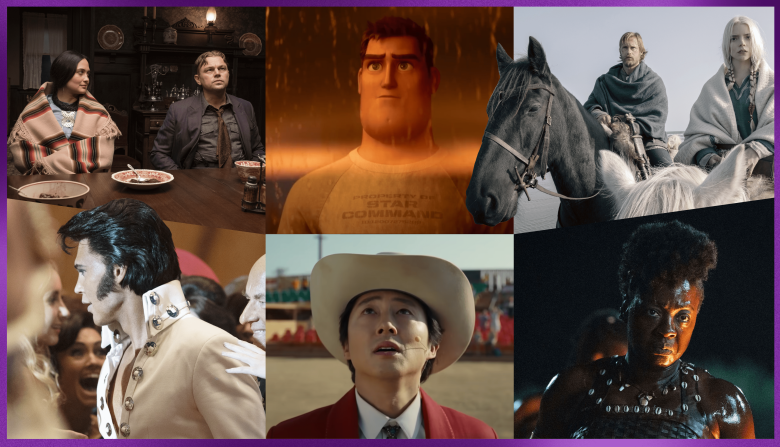 Just when you think you’re out, the Academy Awards will inevitably pull you back in. Not even a viral slap could silence our awards season buzz as we look toward next year’s Oscars.

And lest we forget the cast behind Viking epic ensemble “The Northman,” helmed by self-admitted perfectionist director Robert Eggers, lead Alexander Skarsgård has already received praise for a career-best performance in the Nordic tale, based on the same story that inspired Shakespeare’s “Hamlet.”

Steven Spielberg’s semi-autobiographical film “The Fabelmans” is already poised to be an Oscars favorite, with Michelle Williams, Paul Dano, Seth Rogen, and David Lynch starring in the 1950s-set period piece.

Did we mention there’s a new Leonardo DiCaprio-Martin Scorsese film on the horizon or that “La La Land” Best Director winner Damien Chazelle is back with “Babylon”? Keep scrolling to see our (constantly updated) top 30 films that look poised to be recognized by the Academy in 2023.

Ryan Lattanzio contributed to this story.

Robert Eggers’ third feature film was meticulously researched to make an as-accurate Viking epic drama as possible. “The Northman” stars Alexander Skarsgård as Prince Amleth, who vows to avenge his murdered father (Ethan Hawke) and rescue his kidnapped mother (Nicole Kidman). Eggers co-wrote the screenplay with Icelandic novelist and poet Sjón; the story is based on the same Scandinavian folk tale that inspired Shakespeare’s “Hamlet.” Anya Taylor-Joy, Willem Dafoe, Ralph Ineson, and Björk also star in the period drama that infamously had a grueling 87-day production.

While more CGI was used than auteur Eggers would have hoped (another COVID-related setback for productions in the midst of a pandemic), “The Northman” marks a turning point for studio-funded cinema. As Eggers told IndieWire, it’s rare that a writer-director gets an opportunity to make a “big movie that’s not an IP movie” in the wake of the superhero takeover of box office grosses. Given that Hawke compared “The Northman” to Oscar-winner “Apocalypse Now,” it’s safe to say “The Northman” will be up for a few Academy Awards come next year.

Critically acclaimed Pixar film “Turning Red” tells the story of a Toronto teen who turns into a large red panda whenever she gets overwhelmed. The feature is directed by Domee Shi, and stars Rosalie Chiang as adolescent Mei. IndieWire’s Kate Erbland called “Turning Red” an “instant classic” for its touching portrayal of a Chinese-Canadian upbringing. “It’s emotional, stunning, and a joy to behold,” Erbland wrote. “The lessons are of the usual sort — how to be true to yourself, how to honor your family and friends, the value of culture in all its forms, the need to find humor — but they are rendered fresh and new, with ‘Turning Red’ turning in one of Pixar’s best films not just about the pain of life, but the very joy of it, too.”

Sara Dosa’s “Fire of Love” is a documentarian’s dream. With a truly amazing trove of archival footage taken by married volcanologists Maurice and Katia Krafft, the movie is, seemingly, essentially handed to the filmmakers. However, that surely didn’t make piecing together this vivid and soaringly heart-tugging documentary a simple task. The filmmakers have restored and re-assembled endless reels and dozens of hours of film and video footage dating back to the late 1960s into a witty portrait, aided amply by appropriately monotone narration from filmmaker Miranda July.

At an economical 90-minute running time, “Fire of Love” packs a visual and emotional wallop, with enough close-ups on erupting volcanoes — one, at a point, is called “a bathtub with a hole in it, sowing death all around” — to leave you slack-jawed, terrified, and awe-inspired as you contemplate a life lived at the edge of a 2,200-degree (°F) abyss. National Geographic and NEON are partnering on the film’s release, which guarantees a strong running in the awards season. It’s the sort of crowd-pleasing documentary that all the branches revel in. —RL

Academy Award winner George Miller teams up again with much of his “Mad Max: Fury Road” crew for 2022 Cannes Official Selection “Three Thousand Years of Longing.” The film stars Tilda Swinton as a scholar who encounters a Djinn (Idris Elba), who offers her three wishes in exchange for his freedom. Their conversation, unfolding in a hotel room in Istanbul, leads to consequences neither expected. Miller has described dialogue-driven “Three Thousand Years of Longing” as the “anti-‘Mad Max.’” Originally slated for a September 2021 release, COVID delays stalled the film’s premiere until 2022. Oscar winner Swinton and Emmy nominee Elba make for a promising partnership onscreen as well as potential awards season fodder.

Emmett Till with his mother Mamie Bradley Till

Chinonye Chukwu writes and directs a biopic about Mamie Till-Mobley (Danielle Deadwyler), an American educator and activist who pursues justice after the 1955 lynching of her 14-year-old son Emmett Till (Jalyn Hall). The film utilizes decades worth of research by filmmaker Keith Beauchamp, whose documentary “The Untold story of Emmett Till” in part led to the U.S. Department of Justice reopening the case in 2004. Beauchamp co-wrote the screenplay for “Till” with Chukwu, whose 2019 film “Clemency” landed lead star Alfre Woodard a BAFTA nomination. Whoopi Goldberg, Frankie Faison, and Haley Bennett also star in the historical drama. “Till” premieres October 21.

Academy Award winner Steven Spielberg turns the camera inward as he brings his own upbringing to the big screen with the semi-autobiographical “The Fabelmans.” Set in 1950s Arizona, the film stars Michelle Williams and Paul Dano as  Spielberg’s parents, with Seth Rogen playing his favorite uncle. David Lynch also stars in an unspecified role, alongside “Once Upon a Time in Hollywood” scene-stealer Julia Butters and newcomer Gabriel LaBelle. Spielberg co-wrote the script with his usual collaborator, Tony Kushner (“West Side Story”). “The Fabelmans,” from Amblin Entertainment, will hit theaters wide November 23.

Writer-director Jordan Peele is already an Oscar winner for Best Original Screenplay in 2018 for “Get Out.” His follow-up “Us” earned lead star Lupita Nyong’o a New York Film Critics Circle Award for Best Actress, so Peele fans can expect his third feature “Nope” to garner critical acclaim. Peele reunites with “Get Out” Best Actor nominee (and “Judas and the Black Messiah” Oscar winner) Daniel Kaluuya; Keke Palmer and Steven Yuen join the cast to bring to life the story of a (presumed) alien invasion. The plot details remain under wraps, but a 2022 Super Bowl trailer showed Palmer and Kaluuya playing horse-trainer siblings grappling with the apocalypse. “Euphoria” breakout Barbie Ferreira, “The OA” star Brandon Perea, and Michael Wincott round out the cast. “Nope” is slated for release July 22.

Will the Netflix movie live up to its hype? Andrew Dominik has already placed his fictionalized Marilyn Monroe biopic in the ranks of “Citizen Kane” and “Raging Bull,” two legendary Academy Award–winning films. Ana de Armas stars as Monroe in the adaptation of Joyce Carol Oates’ novel “Blonde.” The author tweeted that the film captured the “magic” of a truly unprecedented tone. “It is startling, brilliant, very disturbing and perhaps most surprisingly an utterly ‘feminist’ interpretation,” Oates wrote. “Not sure that any male director has ever achieved anything [like] this.”

As in Oates’ 700-page book, the players in Monroe’s life are all identified only by nicknames. Dominik’s film adaptation is similarly steering clear of actual names, with Bobby Cannavale playing “The Ex-Athlete” (Joe DiMaggio), Adrien Brody is “The Playwright” (Arthur Miller), and Caspar Phillipson stars as “The President” (John F. Kennedy). The film has already made history as Netflix’s first NC-17 rated original feature, and lead star de Armas called her own casting “groundbreaking” due to her Cuban descent. The “Deep Water” star added to The Sunday Times that she underwent “torture” to perfect Monroe’s voice. And Dominik called de Armas “fucking amazing” as Monroe, telling Screen Daily, “The one thing nobody’s going to complain about is [de Armas’] performance.” “Blonde” has yet to land a release date.

Claire Denis’ long-awaited adaptation of Denis Johnson’s novel “The Stars at Noon” will make its world premiere In Competition at Cannes. Set during the Nicaraguan Revolution in 1984, the film stars Joe Alwyn as a mysterious English businessman who meets an American journalist (Margaret Qualley) reporting on the revolution. The two have an instant connection and a passionate romance ensues, but a “dangerous labyrinth of lies and conspiracies” forces them to try to escape the country. “High Life” star Robert Pattinson was originally set to rejoin his “Stars at Noon” director before production delays on “The Batman” led him to exit the A24 project. Denis wrapped filming “Stars at Noon” in Panama in December 2021. The theatrical release date will be set after its Cannes premiere.

Sign Up: Stay on top of the latest breaking film and TV news! Sign up for our Email Newsletters here.