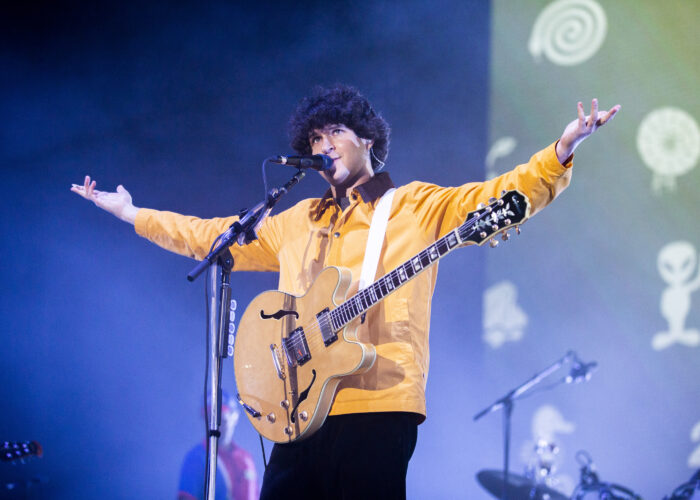 The second day of Outside Lands got off to a colder, wetter and muddier start. But festivalgoers weren’t bothered by the change in weather conditions from day one. After more than a year of pandemic-related delays, the return of the three-day concert at Golden Gate Park felt more normal than ever.

A mild rainstorm arrived in San Francisco in the late morning hours Saturday, Oct. 30, along with low temperatures in the 60s — typical weather in the city, but a big difference from Friday’s summer-like start to the festival at Golden Gate Park.

Frank Stevenson, 43, and Linda Saenz, 42, of Sausalito made sure to arrive as soon as doors opened at 11 a.m. to make the most of their time at the outdoor event. Regulars at the festival since 2009, they welcomed the colder weather, which reminded them of past years when the festival had been held in August.

The shorter October days, however, made a big difference for the couple.

“For previous festivals, when we’re leaving the sun would still be up,” Saenz told The Chronicle as she enjoyed Hinds’ early afternoon set on the Lands End main stage on the Polo Fields. “Last night, it got darker sooner. We were like ‘Oh, why am I so tired so early?’ ”

Entry to the festival appeared smooth in the early afternoon despite the new COVID-19 protocols, with attendees rocking Loki, “WandaVision” and Ranger Dave costumes in the rain; while others simply embraced getting wet in the light sprinkle. Bay Area Halloween revelers attending the festival for the last day on Sunday, Oct. 31, however, can expect mild, dry conditions through midnight, according to the National Weather Service.

Headliners the Strokes closed out the first night of Outside Lands on a weird note, with frontman Julian Casablancas ranting about San Francisco’s COVID protocol and saying he was denied entry to a restaurant for not following the rules. He also appeared frustrated by the sound on the main Lands End stage.

“Am I deaf? Is it crazy low, or is it just low?” he asked, which prompted the crowd to chant “Turn it up!” Pacing the stage, he asked, “Is the P.A. working?”

The next day, the band’s guitarist, Albert Hammond Jr., told The Chronicle that the Strokes’ sound issues were the result of the city’s noise ordinance.

“I don’t think he was so much frustrated as he was confused. When you’re confused and there’s a lot of people you have to play to, it compounds itself,” Hammond said.

Whatever the issues were Friday, they didn’t seem to affect Saturday’s Lands End stage acts Vampire Weekend or Lizzo, who both sounded amazing throughout the Polo Fields to close out the night strong.

“Thank you, San Francisco. We couldn’t ask for a better crowd,” said Vampire Weekend singer Ezra Koenig, adding that it was the band’s first show of 2021. “It feels so good to be back together after so long.”

Lizzo shared those sentiments when she took over the stage just before 8:30 p.m.

“We are so honored to come back to headline this motherf—ing beautiful festival,” she said, before getting into her  2016 hit “Good as Hell.”

What a great surprise to the day! Wishing @marcrebillet a speedy recovery but so happy to catch @reggiewatts tonight #outsidelands2021 pic.twitter.com/nW7EkjJ8h8

Outside Lands wraps up on Halloween night with headliner Tame Impala. For more updates, go to datebook.sfchronicle.com.