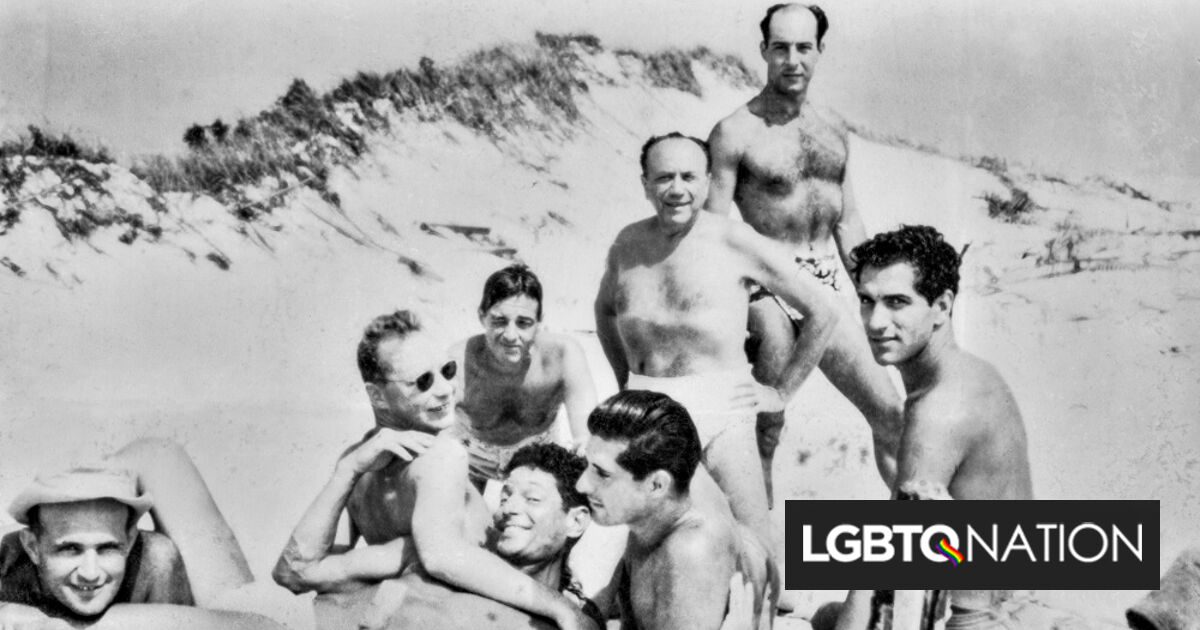 Two men dressed in drag for a tea party, two women cuddled up at the beach. Today these might be benign photographs, but in the early 1950s, they were memories shuttered away from public view.

Until now. These two photographs and a slew of others were a part of the New York Historical Society’s exhibit “Safe/Haven,” showcasing photographs of LGBTQ people in Cherry Grove, New York, a popular vacation getaway for the community in the mid-century.

“They maybe had a sense of, ‘This stayed here;’ it wasn’t going out into the world where it might be used against you as evidence that you were gay,” said Brian Clark, co-curator of “Safe/Haven” alongside Parker Sargent and Susan Kravitz.

The project is in collaboration with the Cherry Grove Archives Collection, of which Clark has been on the board for more than a decade. The exhibit first went on display at the Stonewall National Museum & Archives in Fort Lauderdale but was cut short due to the pandemic.

The team has collected photographs of the LGBTQ experience in the community over the years — some have been donated by family members who inherited photographs, and others were salvaged from the sidewalk before they were picked up by waste collection. The board received a large collection from a gentleman who died after spending decades collecting materials, as well as four photo albums from Earl McDonald, who performed on Broadway from the ‘20s through the ‘40s.

So far, they have digitized roughly 16,000 photographs.

“Every time I would go through and get another donation, we would just be so impacted by the joy, the fun, and the community that existed,” Clark said.

The idea behind “Safe/Haven” was to showcase a world that was not able to be documented until the advent of instant photography, such as Polaroids and photo booths. Here, LGBT people were free to be themselves and have a lasting memory without having to drop off films to be developed by a third party.

This was also happening during the post-World War II era when people were being shipped to large port cities to report for duty. There, they met other LGBT people and for many, experienced the culture for the first time, explains Julio Capo, an associate professor at FIU’s Department of History as well as a board member at the Stonewall National Museum & Archives.

To hide their sexuality, gay couples would often pair up with lesbian couples on double dates for a fun night out, and “swap” to pass as straight couples, he says. And for photos, it wasn’t uncommon for people to wear masks to hide their identity.

“Dropping off an undeveloped film at the pharmacy in the 1950s would have literally meant risking everything. It would have been incredibly difficult — and daring,” Capo said.

Cherry Grove was a popular vacation spot for LGBTQ people — located on Fire Island, they were free to be openly affectionate, attend costume parties, theater productions, and rub elbows with the likes of Truman Capote, Patricia Highsmith, and other creatives. “Safe/Haven” chronicled the atmosphere of lively parties as well as intimate moments between couples.

“The media portrayed gays and lesbians as living terrible, disparaging lives,” Clark said. “This is an example of how even under the risk of being found out and the need for safety and secrecy, people were able to, here in Cherry Grove, have a community.”

This was also a time of segregation — as restrictive as it was for LGBTQ people to be out, for people of color it was even more difficult to be targeted for both their sexuality and race. In this exhibit, which consists of mostly white people, privilege is a part of the conversation with being able to vacation on Cherry Grove.

While Polaroids and photo booths were easy and private ways to capture memories, there were also LGBTQ-friendly camera shops. Take Harvey Milk’s Castro Camera, which served not only as a place to develop film but also became a meeting place for activists. There were also gay-owned and operated companies that were safe places to print materials for protests.

“We don’t think of something like developing your own photograph as being overtly political, but goodness, it really, really was,” Capo said. “It was an act of defiance and an act of bravery. It was incredibly political and significant to shaping the very lives we’re able to live today.”

For both Clark and Capo, looking to the past helps them understand the lives we live today — recognizing the sacrifices of the predecessors who fought for equality, for something as simple as taking a photo next to their partner.

Christiana Lilly’s foray into journalism began at 11, when she put together a one-page gazette for classmates recounting field trips, announcing the lunch menu and other important news. Today, she’s a freelance journalist who covers a plethora of topics, including contributing regularly to South Florida Gay News. There, she covers health, religion, law and activism impacting the LGBT community.

The Most Important Photography Gadgets that Dropped in 2021