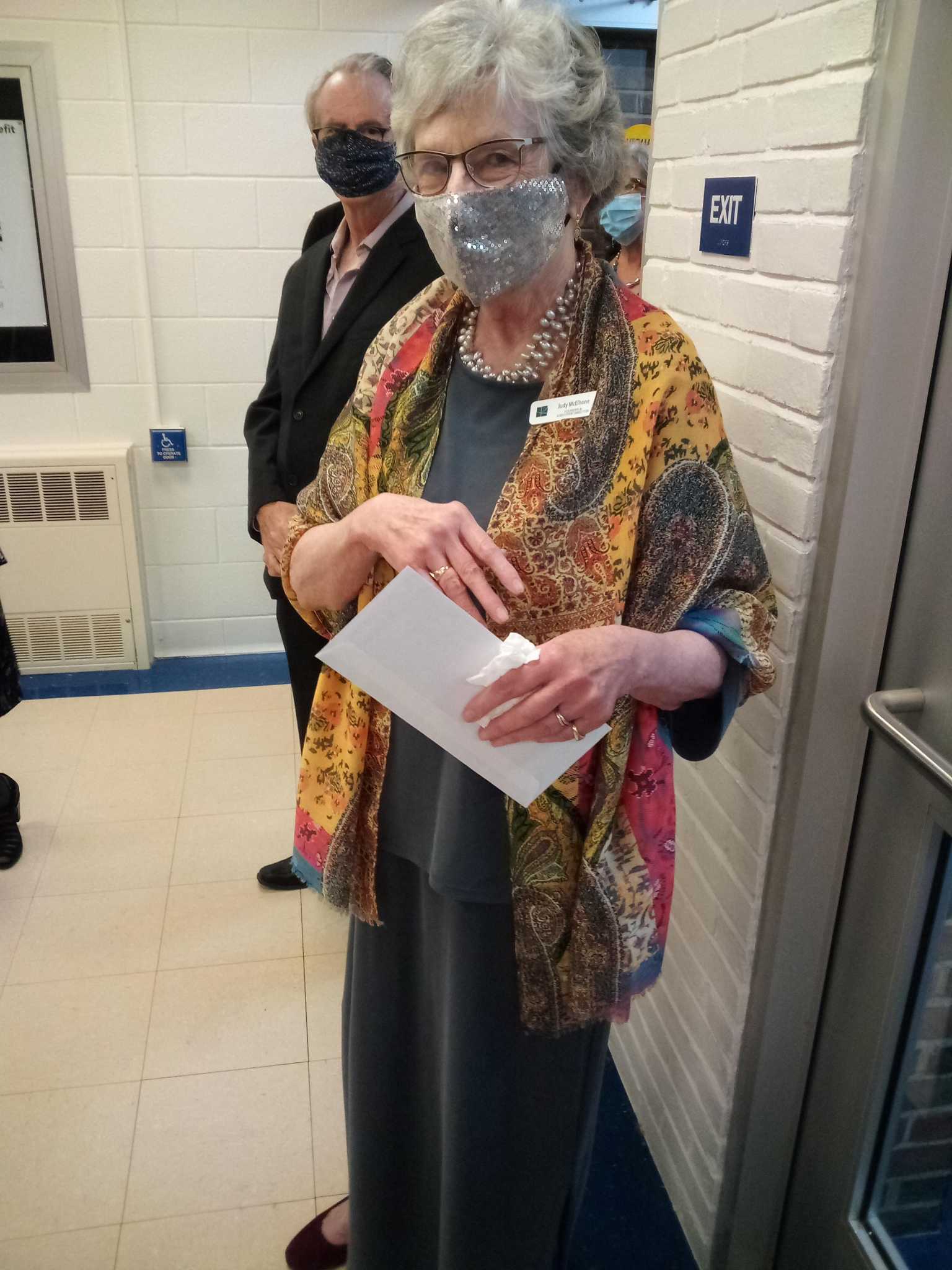 TORRINGTON — By 6 p.m. Saturday night, a line of several hundred well-dressed guests were standing outside the new Five Points Center for the Visual Arts, hoping they wouldn’t get caught in the rain.

The gathering was held to celebrate the arts center opening, a dream realized by founder and executive director Judy McElhone, who stood by the door, greeting guests as they filled the lobby. The rain held off until nearly everyone was inside, much to her relief.

Even before the crowd was inside, they saw an example of McElhone’s efforts, when several works by renowned sculptor Don Gummer of New York City were delivered and installed near the entrance of the building. Four more of Gummer’s pieces are expected to be delivered this week. The Gummer works will be on display until the end of the year.

Former state Rep. Roberta Willis, who attended with her husband, Bill, and friend Janet Block, said having Gummer’s pieces at the opening was an important statement.

“The last time I saw one of these was in Columbus Circle in New York City,” she said. “I was involved in the first concepts of an arts center in Torrington, using the creative community, for the recovery of downtown. It’s gone much further than that, and national and international artists like Don Gummer are part of it now.

“It’s wonderful to see this come to fruition,” Willis said. “The real heavy lifting is still to come.”

The arts center is in the former UConn’s Torrington building, which closed in 2016 and was purchased by Five Points Arts in 2020. Since then, McElhone and a team of staff and volunteers have spent their days renovating and converting the classrooms into spaces for painting, photography, printing, drawing and children’s activities. Much of the equipment has been donated, including the contents of the Robert Dente Printmaking Studio that has been installed in the building’s former library.

On Saturday night, the celebration’s guests were able to self-tour the building — a one-story structure surrounding a courtyard that will soon become a sensory garden, outdoor studio and meeting space — while enjoying a variety of food provided by Ciesco Catering and refreshments from the Litchfield Distillery.

The center is a major achievement for the Five Points group, which started with the Five Points Gallery on Water and Main streets in downtown Torrington and now includes a second gallery, the Annex, and the Launchpad program that provides working spaces for recent art school graduates. At the visual arts center, a multitude of classes in painting, drawing, sculpture, mixed media, photography and printing are available to adults and children, as well as groups from organizations like LARC of Litchfield County.

State Rep. Michelle Cook, D-Torrington and her husband, Chris Cook, were among the guests. Cook, who worked with McElhone to broker the deal to buy the former college building, said the center is a step for the city’s future.

“This puts our town on the international map,” Cook said. “This is what we need to invest in our city, not just for the arts, but for our businesses, shops and restaurants. I’m glad to be part of it.”

“I’m totally and positively blown away,” said developer Ken Merz, a partner in KidsPlay Children’s Museum, another relatively new venture for the city and a supporter of the arts center. “It’s just terrific. I’m so pleased to see what Judy has done.”

“This is a very important night for Torrington,” said City Planner Marty Connor, who attended with his wife, Janice, and was spending time in the Dente Printmaking Studio.

“This will bring people from all over to create art,” he said. “It’s amazing what Judy has done; she’s so creative and such a visionary.”