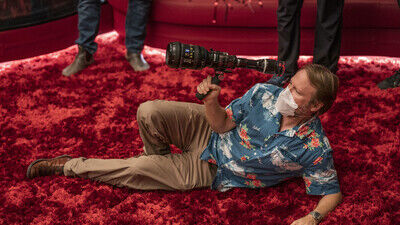 It was like a layer cake, and it was fun. It was uniquely challenging. But the puzzle box itself—Chris Peck, who’s our prop master, worked with a bunch of artists, and it’s all practical. It’s not like there’s one box that does all that stuff, but in different pieces, every piece of it.

Well, with puppeteers as opposed to having a CG object. It was actually built. We painted some hinges and some puppet rods and stuff, but I think you can feel the tactile nature of it. I’m so happy with how it feels like a magical puzzle box of the mind.

It’s a great way to introduce the characters, but it’s also such a metaphor for the movie, and so it’s perfect. What is it about mysteries that fascinate us so much?

In a way, you can get high-minded and say the essence of drama is the chaos created by a crime, and then the restoration of order by the detective solving it at the end. There’s also just the intrigue of a good puzzle. Although I will say, I feel like a big part of how I try and approach these movies is specifically not thinking of them as puzzles. I like taking much more of the Hitchcock approach, of thinking of them as roller coaster rides. I feel like you can get into trouble if you start thinking in the mode of “I’m creating a puzzle for the audience to solve.” Because that’s almost like something you weave in after the fact in a satisfying way.

And the ending. Endings are my favorite thing about movies. And it’s like Hitchcock said, there’s very little actual satisfaction to be had from a surprise being the payoff at the end of the movie. I think what gets you to a successful ending is something that is dramatically satisfying. And that suspense as opposed to surprise, and the release of suspense in a satisfying way at the end, as opposed to, “Oh my God, I never could have guessed that.” I mean, that’s fun, and hopefully, you put that in there, too. But to me, that has to be secondary to a payoff that actually works the way any other good movie works.

Is there going to be another one?

I’ve already started to come up with ideas. As long as Daniel and I are having fun doing this, as long as people want to see it, I’ll keep making these.

“Glass Onion: A Knives Out Mystery” will be available in theaters on November 23rd for one week and streaming on Netflix on December 23rd.