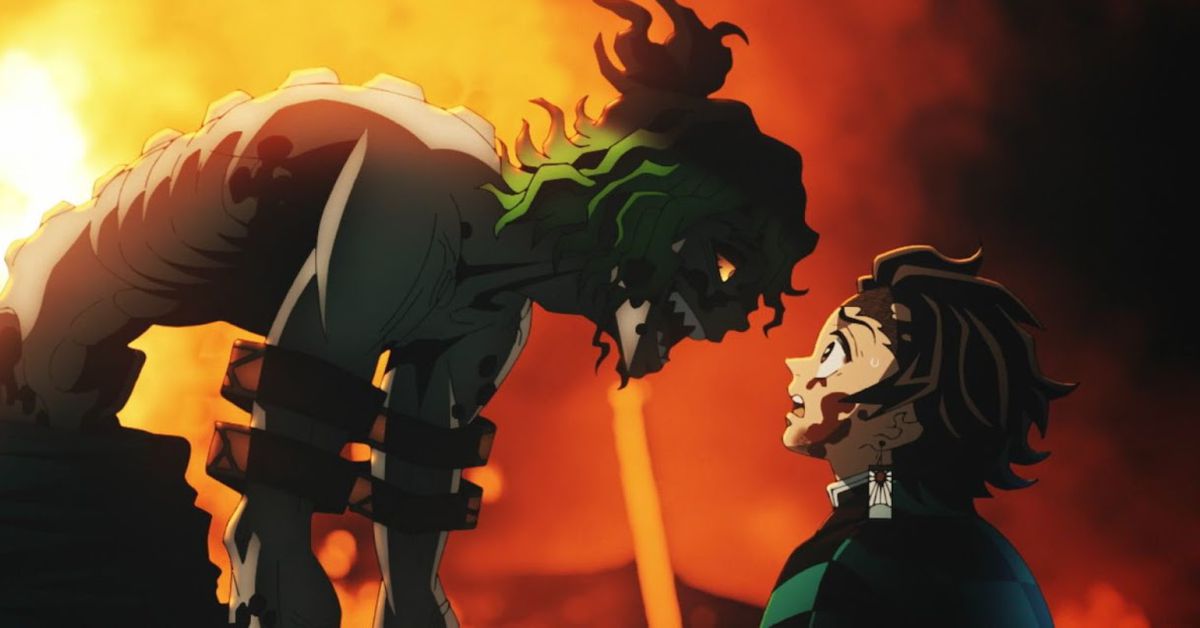 Between a Demon Slayer’s sword and an Upper Rank 6 demon, flames were everywhere in “Never Give Up”, the penultimate episode of Demon Slayer’s Entertainment District Arc. As Tanjiro Kamado clung to life in his fight against demon Gyutaro in the beginning moments of the episode, the district fell to the flames of Tanjiro’s Hinokami and Gyutaro’s mighty strength, leaving the demon slayer to wonder if the residents of the area made it out OK. The breathtaking devastation in Yoshiwara was emphasized by a lingering wide shot of the area.

But for residents of Yoshiwara during the Taishō era, the period between the years 1912 to 1926, this destruction of the district would be all too familiar. Time after time, much like Edo itself, Yoshiwara fell to ruin and was reborn anew.

The continual destruction of Yoshiwara

The Yoshiwara we see in Demon Slayer: Kimetsu no Yaiba Entertainment District Arc is a city born out of the ashes of another. The original Yoshiwara, which was founded in 1617, was situated in an area that is now known as Nipponbashi, one of the most central locations in Tokyo and close to the Imperial Palace. The original district was set up by the shogunate as part of the Licensed Prostitution System, not to hide away the debauchery that went on, but keep the sex industry centered in one location for ease of taxation and regulatory procedure. (A very governmental thing to do.)

As Edo grew from a rural town where the then emperor spent his holidays to a merchant city, the area surrounding Yoshiwara became more and more urbanized, and the space occupied by the pleasure district was needed for the hordes of people moving to the east capital. Around this time, Edo’s first major fire (known later as the Great Fire of Meireki) burned down most of Edo, and took Yoshiwara with it.

Like a phoenix out of the ashes of destruction, Shin Yoshiwara (New Yoshiwara) was born on the outskirts of Asakasa. The shogunate forced the businesses to move to the then rice fields and set up shop in 1657, where for nearly 100 years, the area stood as a testament of the fleshly desires of Edo.

But the new location still saw its fair share of fires. Every 20 years or so, Shin Yoshiwara residents fled to temporary housing in Asakusa while they watched their houses and businesses crumble — a common sight in Edo where machiya–style buildings were made of wood and were close enough to each other you could borrow cooking materials by reaching into your neighbor’s kitchen.

The cause of these fires was often arson: sex workers of the yukaku pushed to their limits by abuse from the hands of their owners and customers, or Shinto priests trying to rid the district of demons. A smaller nearby pleasure district known as Susaki Paradise also burnt down often for similar reasons.

These recurring smaller blazes (if you could call blocks of buildings being burnt down “small”) culminated in the April 1911 Yoshiwara Great Fire. The fire was so large it followed the Sumida river to neighboring districts — including the famous Asakusa area — destroying the entire Yoshiwara area — including 300 rental parlors (so called because one could “rent” a girl from the window), 123 Hikie teahouses (where a suitor was introduced to a “higher-class” girl who would entertain him for the night), as well as 650 houses and dormitories.

Just as Yoshiwara had many times, the area rose from the ashes to serve its clientele for another decade … until the Great Kanto Earthquake in 1923, which once again leveled the district as well as most of the bustling city. It was estimated that the 7.9-magnitude event took out 70% of Tokyo’s buildings, with the subsequent fires and aftershocks helping with that statistic. Yoshiwara, which had only recently rebuilt itself, saw whirlwinds of fire engulf the district, with a strong typhoon helping the flame reach 20 meters into the air. It is estimated that over 40,000 people perished as these flaming whirlwinds cut off the exits out of the district, leaving them to die in these flames.

This was the last time Yoshiwara would be rebuilt to serve, as the area was leveled again during the bombing raids of Tokyo in World War II, and then legislated out of existence in 1958 when the Anti-Prostitution Law came into affect and destroyed the district more than any of the fires did. But the area mostly exists today — though it is just another urban Tokyo suburb with some soaplands, rather than the flashy district that is portrayed in Demon Slayer.

The unfathomable destruction of Yoshiwara lent itself greatly to the world of Demon Slayer, inspiring manga creator Koyoharu Gotouge to make the pleasure district (which translates to “yukaku” in Japanese, the name of the arc in Japan) the setting of the most public (and flashiest) fight between demons and slayers yet.

When the series introduced Yoshiwara in the second episode of the Entertainment District Arc, the yukaku’s seemed to be the perfect home to demons, thanks to the night-life aspect of the area and the then-intermittent destruction. Daki, one of the demons of the arc who was using her title of oiran (the highest rank a girl of Yoshiwara can get) to kidnap others, had to constantly become a new person so as to not raise suspicion over her 100 years of youthful life. That’s easier to do when the district has all-but turned to ash every few decades.

While the manga did its job of conveying Gotouge’s story, the anime produced at Ufotable only increased the similarities and realism of just how hazardous life in Taisho-era Yoshiwara might’ve felt, either in the face of an Upper Rank Six demon or real-life disasters.

The visceral use of realistic-looking flames, mixed in with the photorealistic backgrounds, and orange hue in the lighting across the scenes made for some utter stunning atmospheric shots. Machiya burning in the background, wood everywhere on fire, the sewer in the middle of what used to be the gravel path between houses. If someone from Taisho-era Yoshiwara saw the footage, they likely wouldn’t be amiss if they thought they were looking at footage recorded from the 1911 fire — though the giant walking skeleton of a demon might tip them off that isn’t real.

Whenever Gyutaro was in frame on the attack, flames danced everywhere, while shots with Tanjiro leading the attack had more subdued flames, symbolizing that demons were as much a bringer of natural disasters as they were supernatural ones. This also includes when Gyutaro and Tengen fought, where each clang of the weapon brought Man of Steel-levels of destruction to Yoshiwara in a way not seen since the Great Kanto Earthquake.

The staff at Ufotable didn’t need to go this hard on the animation of this episode, but the one-two punch of Toshiyuki Shirai storyboarding and directing the episode with a caravan of amazing animators that included legendary animator Nozomu Abe, who both worked together to create shots from season 1’s “Hinokami” that blew the minds of viewers around the world, leveled the animation beyond anything we’ve really seen in TV anime before. The CG staff were flexing harder than Tengen’s muscle mice.

Like Yoshiwara itself, rising like a phoenix out of both metaphorical, physical, and self-created flames, Tanjiro was able to overcome the demon Gyutaro and save what was left of the district. But the final lingering shot of Yoshiwara used in place of the end credits is a hauntingly poignant moment that looked like the scene of a bomb going off, or an earthquake rolling through. If I hadn’t seen the episode before it, I wouldn’t be surprised if someone had told me it was a painting from the era.

Japanese cinema has a history of lifting imagery from real-life events to invoke the emotions one may have felt at the time to really hammer down the weight of a scene. One of the best examples of this is Hideaki Anno’s Shin Godzilla, which blatantly referenced the 2011 Tohoku earthquake and tsunami, using similar camera angles as the news footage from the day to give that sense of dread that even I felt watching the news footage when it was broadcasting live around the world.

Japan is a country of rebirth, especially through natural disasters. While Demon Slayer may not have the luxury of 4K camera footage from a fire in 1911, the staff at Ufotable do have thousands upon thousands of images to reference, as well as footage from disasters from the last decade. The memory of the 2011 Tohoku earthquake and tsunami still linger in the public consciousness, with the home flattened by waves looking similar to that of Yoshiwara in 1911 and in Demon Slayer.

These allegories to real-life events, whether it be from 1911, 1923, or 2011, gives us a sense that these Upper Rank demons — who we’ve barely touched on to this extent in the series thus far — are basically unstoppable natural disasters (unless their head gets cut off).

It’s clear that the staff at Ufotable did their homework when looking up reference footage of fires and destruction from the era and probably used photos, as seen in the real photos above of the Yoshiwara Great Fire and below from the ending of the 10th episode of the Entertainment District Arc.

The utter feeling of hopelessness that this single wide angle shot has was gut-wrenching, especially since we’d just seen the four Demon Slayers defeat both demons after half the arc had been spent on just chopping at the neck. As much as the series left us on a cliffhanger between episodes 9 and 10, the gall of Demon Slayer to leave viewers hanging with such vivid imagery — ripped directly from the pages of the real-life horrors of history — deserves a round of applause.