“Navigating White Spaces,” a scratchboard drawing by Christiane Dolores for a song by the same title, part of a visual/musical project highlighting the themes of love, joy, liberation, and chaos

The question of human cruelty is one that Christiane Dolores has explored through much of her art over the years, utilizing different mediums to really get at the root of societal ills like racism and white supremacy. And these questions have been a part of Dolores’ personal narrative since she was a young child. With a mother from Germany and a father from Pittsburgh, Dolores grew up in a family who were under a lot of scrutiny. She describes being called both the N-word and a “honky” and asking herself, “How does this happen?”

Back in August, the Westmoreland Museum of American Art in Greensburg announced Dolores, also known as Madame Dolores, as its new Artist-in-Residency. Presented in partnership with the Garfield-based arts hub BOOM Concepts and The Pittsburgh Foundation, the Artist-in-Residency program, which was established in 2020, features four to six artists annually, and was primarily launched to give Black and marginalized artists a space to create and showcase their art.

Dolores, who will be in residence until February 2022, is a multi-platform, cross disciplinary artist who is described as employing “sound, vision, text, and performance as storytelling tools to create radical, sometimes controversial, cultural engagements.” 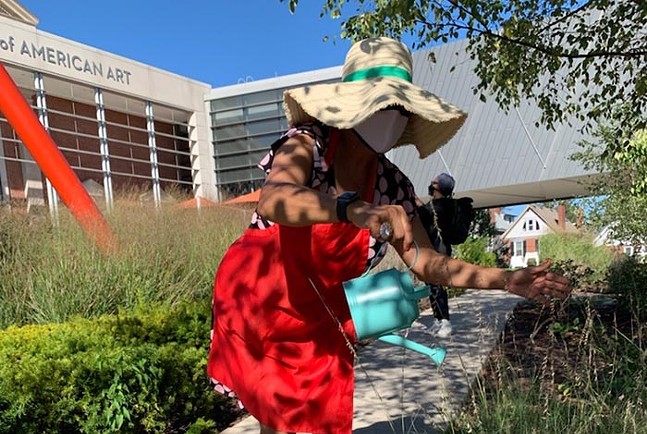 Christiane Dolores at the Westmoreland Museum of Art

“It’s utilizing different art forms to kind of grapple with this question of human cruelty and human inhumanity. What are we doing on this planet? Is it possible to have peace? Has peace ever existed for humans throughout our whole history?” says Dolores. “So it’s this kind of question, and it can be spurred by what’s happening in the news or anything, but it’s still the question of, why do we act like this? Why do we treat each other like this?”

Dolores says she began to question why we, as humans, hurt each other and judge each other even from a young age. She says we’re all people, and not in some “kumbaya” way. As humans, she believes there should be some understanding and compassion for one another, as we all live under the same conditions.

“I wanted to be an astrophysicist and an anthropologist. So my mind goes into science. I simply don’t understand how we forget ourselves — I think we forget our essence,” she says.

Creating art that speaks to these questions comes with a lot of personal work, so a comfortable environment is crucial. Dolores says she is very mindful and concerned about waste, so most of the preparation work she has to do, she’ll try to do in her head. Instead of sketching out ideas, she projects them in her mind until she reaches the right version. She says The Book of White People, her first exhibit at BOOM Concepts, took her 10 years to figure out.

She also focuses on healing after each creation. She says that after doing a project on mulatto slavery — mulatto being a historically derogatory term used to describe children of both Black African and white European ancestry — she became very ill, and still deals with that illness in some ways.


“It’s taught me that hate, discrimination, and racism, all of that, it’s a critical health issue. What it does to you. I think about all my illnesses, and they’ve all been precipitated by extreme interactions with racism, and it gets in your body. And so I’ve had to teach myself how to handle that energy and how to not let it overtake my health,” she says.

Dolores says she spent time at some of the top art schools, but left them after not seeing enough Black artists covered in the learning materials. She says that in her home growing up, Black artists were championed, and so spending money to learn in an environment where that wasn’t the case didn’t make sense to her. 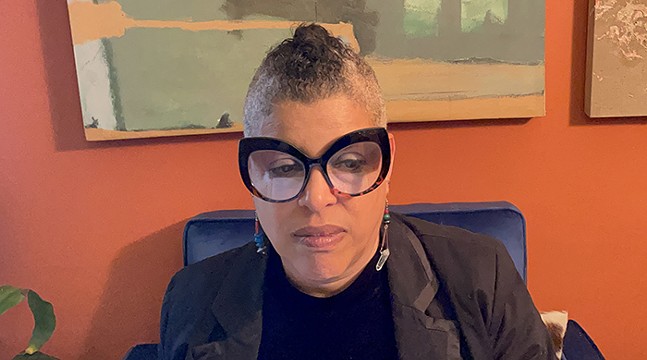 “I’m not paying you to teach me to erase myself. I’m not going to pay you thousands of dollars to be blind to the history of my father’s people. The history of my great, great grandmother’s Cherokee people. I’m not paying you this money to pretend that we didn’t do anything,” says Dolores. “You know, it’s so easy for them to look around and think, ‘Oh, we built the rooms. We built this.’ Well, of course you did, because you wouldn’t allow anyone else to do it. You think this justifies your superiority, but no, it shows fear, just abject fear to me.”

This residency presents Dolores with time to work on her many projects employing text, textiles, and more, as well as a horror movie.