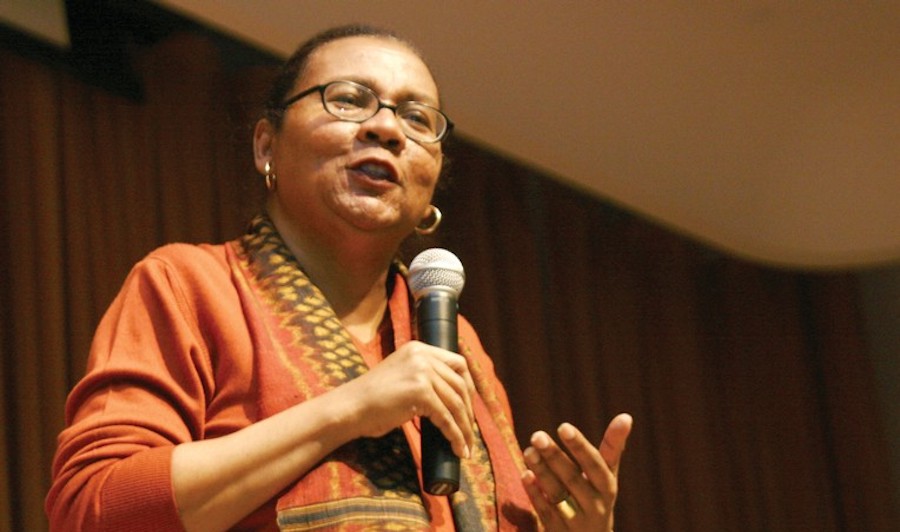 bell hooks, a Hopkinsville, Kentucky native turned celebrated thinker and cultural critic, died at 69 on Wednesday, December 15, at her home in Berea. All of us — critics and writers and scholars — are in an endless dead-heat of a game of imitation, trying our darndest to get our thoughts on the page like hooks. Her writing feels like when you stutter, and an idea is on the tip of your tongue, but you can’t seem to find it, but suddenly she’s there, putting everything into words. Her clear-eyed essays on the paradigm-shifting power of love, or her observations on the white supremacist capitalist patriarchy, should be sewn into the fabric of our understanding of our culture.

Not every academic’s work bleeds and suffuses into nearly every cultural field. Generations of us, across disciplines, were raised on hooks; she helped us to see not only ourselves, but ourselves within the history that hangs on us like a leech. After leaving that segregated Kentucky town for college to attend Stanford, hooks too became unbound by her studies, diving into feminism and the omnipresent fact of white supremacy. By 1983, she held advanced degrees from the University of Wisconsin and the University of California, Santa Cruz, where she received her doctorate in literature. In between her studies, she published her first poetry collection and first nonfiction work, Ain’t I a Woman: Black Women and Feminism, in which she describes the lingering effects of slavery and sexism on Black women, where even revolutionary men sought to erase and marginalize us. Before intersectionality entered the mainstream lexicon, hooks urged us to consider how our identities are bound up in race, class, and gender all the time, all at once.

Some thinkers gobble the world up and spit it out, right back at us, leaving the reader to navigate the many meanings of their tough language and profound yet roundabout arguments. But hooks resisted this kind of academic jargon, preferring more direct inquiry. She gazed at the world, at the love and tenderness all tangled in the white supremacy and patriarchy, and tried to make sense of it with the unique clarity of her pen. Although she is most known for calling for a feminism that centered the particular experiences of Black women, she also called for new kinds of criticism that took the work of Black artists — particularly in the visual arts field — seriously. Why is it, hooks wondered, that visionary Black artists lack the kind of rigorous scholarship and criticism that their non-Black counterparts garner? Is there a future that we can imagine together, one where our work can provoke intellectual inquiry for us and by us? How can we liberate the arts from whiteness?

“Sadly, conservative white artists and critics who control the cultural production of writing about art seem to have the greatest difficulty accepting that once can be critically aware of visual politics — the way race, gender, and class shape art practices (who makes art, how it sells, who values it, who writes about it) — without abandoning a fierce commitment to aesthetics,” hooks wrote in her introduction to her 1995 book about art. “As we critically imagine new ways to think and write about visual art, as we make spaces for dialogue across boundaries, we engage a process of cultural transformation that will ultimately create a revolution in vision.”

Not content to wait for a bevy of critics to comment on the going-ons of the non-white art world, hooks took it upon herself to write about the artists she believed to be critical in the field. She was struck by the work of Carrie Mae Weems, Alison Saar, Felix Gonzalez Torres, Lorna Simpson, Jean-Michel Basquiat, and Emma Amos. Her groundbreaking theory of an oppositional gaze — or a rebellious way of looking at images, movies in particular, that centers Black women and rejects white supremacist patriarchal modes of looking — could be extended to her art criticism. She found Weems of particular interest, as both the critic and artist actively de-centered whiteness in their respective work. “[Her] photoworks create a cartography of experience wherein race, gender, and class identity converge, fuse, and mix so as to disrupt and deconstruct simple notions of subjectivity,” she wrote on Weems’ photography.

Throughout the past four decades, hooks’s work, which has survived college syllabi and drawn the ire of Beyoncé fans, remains a benchmark for how we make sense of our cultural landscape. After teaching stints at Yale University, Oberlin College, and the City College of New York, hooks settled in Kentucky to teach at Berea College, where she founded the bell hooks Institute.

Paintings Rather than Pictures

This desire to go beyond the ordinary without forgetting its existence seems to be one motivation that Jane Freilicher and Thomas Nozkowski shared.

How the Met Museum Justifies Looting

The African Origins exhibition ignores the fact that approximately 160 objects from Benin are held by the museum under ongoing demands for their repatriation.

John Yau and Albert Mobilio select a few choice titles from the past year.

Working for the first time without his brother Ethan, Coen’s film adaptation, featuring Denzel Washington as Macbeth, embraces the text with unusual faithfulness.

Also, advanced degree holders were more likely to trust curators to tell the truth, exposing gaps in the way the profession is perceived.