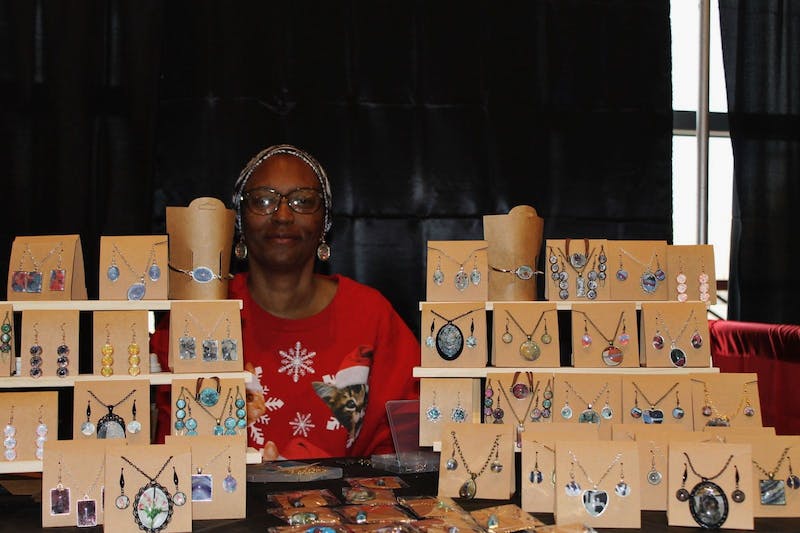 The Associated Students at the University of New Mexico arts and crafts studio held its 58th annual Arts and Crafts Fair, running from Wednesday, Nov. 30 through Friday, Dec. 2, at the Student Union Building. The fair featured over 70 artists — students and community members alike — and was also several artists’ first show.

Julie Wagner, the ceramics technician for the arts and crafts studio, was a part of the team that organized and ran the show. One of the event’s goals was to provide access to work by student artists at UNM, something that also factored into the artist selection process.

“About 40% of our vendors this year are students or alumni, mostly current students, undergrad(uate) or grad(uate). So that’s definitely something we take into consideration when we’re vetting vendors. And the other thing is we look for beauty, quality (and) functionality,” Wagner said.

Students Bryanna Acosta and Michael Cole participated by selling their pottery. Acosta said she was encouraged to apply when working in the arts and crafts studio, which is where she made her pieces for sale.

“I’ve gotten to meet so many cool people, like all of the other artists. All the other booths were so incredibly talented. So it’s cool just meeting people. And people that I have always seen in the studio come, and I’m like, ‘Oh, hey, you’ve seen it before,’ and go talk to each other. And now I feel like you’re making new friends,” Acosta said.

For local artist Demetria Davis-Boyd, who has been creating jewelry since 2000, this was also her first time showing her work at the fair.

“I make costume jewelry. So, you know, you can buy a pair of $10 earrings and put some lip gloss on and just make yourself feel good. You don’t have to have expensive tastes or anything like that,” Davis-Boyd said.

The name of her business is “Goddess up,” which is a play on the phrase “man up” to encourage feeling good about yourself.  In seeking to forward that idea, Davis-Boyd also donates all of the jewelry that doesn’t sell to Casa Esperanza, a location for families to stay while seeking health care in Albuquerque.

“I usually donate my jewelry to Casa Esperanza … They can put on some earrings when they go to interview or a necklace. They kind of feel better about themselves,” Davis-Boyd.

Cole’s booth was called “Gay clay space;” it gave him the chance to connect with other members in the queer community of different ages and share positivity, he said.

The arts and crafts studio wanted to give artists a platform to share and sell their art work through the fair, according to Wagner. They also wanted to show ASUNM and the UNM community at large values artists and art on campus.

“I think the arts are one of the most important things, especially to have on a college campus, to make accessible to students and the community,” Wagner said. “But also because art is something that should be appreciated by an academic culture, especially at this school: we’re in New Mexico, we’re in one of the biggest art hub states.”

Enjoy what you’re reading?
Get content from The Daily Lobo delivered to your inbox

Maddie Pukite is the managing editor at the Daily Lobo. They can be contacted at [email protected] or on Twitter @maddogpukite