A look back at Live 105, the station that brought alternative music to Bay Area ears for 30 years 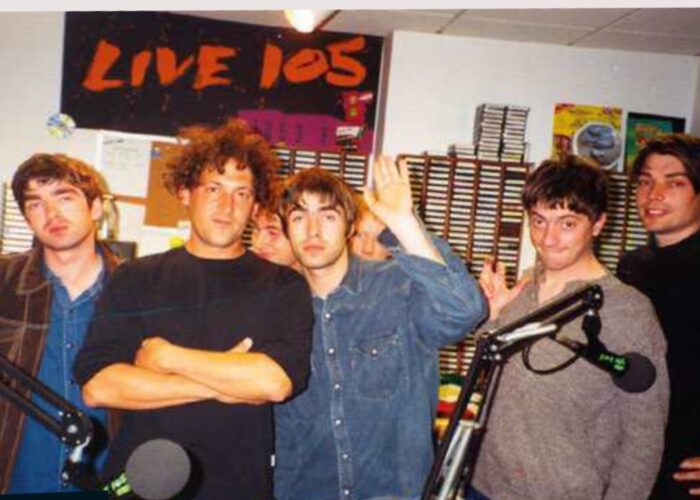 On a recent Friday afternoon, Bay Area listeners who had their radio stations tuned to KITS 105.3 FM noticed something odd. The frequency that for more than 30 years was the home of the region’s leading alternative rock station, Live 105, was playing the leaden chords of Guns N’ Roses 1987 hit “Welcome to the Jungle.”

OK, maybe that worked on a playlist that occasionally favored guitar-heavy bands like Nirvana, Jane’s Addiction and Green Day. But what came next was entirely perplexing: decades-old hits by a jumble of artists that included the Pointer Sisters, Billy Idol, Hall & Oates, Blur, Kiss, Duran Duran, MC Hammer, the Killers and Journey.

Then there was the station’s jingle, delivered with a self-satisfied sneer by something called 105.3 Dave FM, proclaiming “Totally random radio!”

Without much fanfare Audacy, the media company that owns 235 radio stations in the United States, had killed off a Bay Area institution and turned it into yet another generic place to hear retro Top 40 music in shuffle mode, much like walking through a Whole Foods market.

The outcry from longtime listeners on social media was swift and enduring. Some wondered if it was a prank. Others recalled attending Live 105’s blockbuster events, like the BFD festival or end-of-the-year Not So Silent Night concerts. But most of the messages lamented the loss of community the station had established since switching to the modern rock format in 1986.

“In the pre-internet era, opportunities for finding like-minded music fans were few and far between,” said Jeremy P. Goldstein, a Concord native who grew up with the station. “If you saw a car with a Live 105 sticker, you knew you already had something in common; that they were part of your musical tribe.”

Yes, Live 105 was a progressive radio station that broke the monotony of mainstream radio in the late ’80s and ’90s with left-field pop acts from the U.K. like the Cure, New Order, Smiths, Radiohead and the Jesus and Mary Chain. But it was more than the music. It was the spirit of the station and the personalities behind it.

“I felt like I found a station that was made for me,” said Aaron Axelsen, a Livermore native who was a fan of Live 105 long before he become its music director. “It represented my values, everything from being environmentally savvy to embracing new music.”

“It was hard to turn off the radio station at the time because you didn’t want to miss anything,” Masters said. “You never knew what was going to happen next.”

Masters orchestrated the impromptu on-air meeting of Brit-pop bands Oasis and Blur at the height of their rivalry in 1994.

Live 105 fortified its sense of community with one-of-a-kind live events around the Bay Area, like the Modern Rock Cruise with David Bowie’s band Tin Machine and annual holiday concerts like Green Christmas, where acts like No Doubt, Sonic Youth, Garbage, Hole and Tony Bennett shared the bill. The station also regularly hosted free concerts at Union Square and in the Embarcadero in San Francisco.

“There was definitely real work that went on, but you wouldn’t be able to tell by listening,” Masters said.

The station hit its rating peak in the mid-’90s by creating a playlist that distinctly represented the Bay Area’s tastes — a blend of post-punk, dance-pop, indie, local and underground.

“It was a very unusual radio station,” said Sands. “The Bay Area is really a special place. Our slogan was, ‘The station that dares to be different.’ ”

As music tastes evolved, so did Live 105. It was the first mainstream outlet in the Bay Area for grunge, electronic dance music, pop-punk, emo and so on. It even went through a rap-rock phase. The ratings sometimes faltered, but the core listeners remained loyal.

“We didn’t have the biggest ratings but for those who supported the station, it meant a lot to them,” said Axelsen.

Mary Nite, who worked as an account executive at Live 105 for more than 20 years, said it felt like family.

“Everyone poured their love into the station,” she said. “We all worked long, tireless hours behind the scenes and did it all for our listeners. It was beautiful.”

Eventually, Live 105 started to falter under the demands of its corporate owners, who mixed in nationally syndicated programs like Howard Stern’s morning show and the relationship advice show “Loveline” into the lineup.

But the local staff always remained dedicated to the original cause.

“If we heard a song and liked it, we played it,” said Spud. “They weren’t songs chosen by the record labels. Everyone was driven by the passion for cool new music, and it brought us all together.”

The station hit another stride in the mid-2000s as an early champion of bands like the Strokes, Yeah Yeah Yeahs and the White Stripes. Axelsen’s local music showcase “Soundcheck” and electronic music show “Subsonic” were among the most popular of their kind in the nation.

“That connection we had to the audience is what makes the medium of radio special,” said Axelsen, who is now program director at online station FloodFM. “We were real and sincere. You just can’t capture that by piping in DJs from other markets. It just doesn’t work.”


A look back at Live 105, the station that brought alternative music to Bay Area ears for 30 years